An Overview Ois has a lot to celebrate. The brand is at the top of its game, with some incredibly good looking and reliable watches in its roster. It’s a brand that offers possibly the best value in the Swiss watch industry, and the honest pricing has roped in true watch enthusiasts and made them loyal patrons of Oris. With timepieces that range from modern dive watches to vintage-inspired pilot watches, Oris has done its homework about the current horological market quite well, as it caters to all kinds of buyers. Everybody loves Oris. They are the Raymonds of the horological world. Now though, they’ve exhibited a bit of a rebellious streak, wanting to bring something edgy and disruptive to the table. And for their 115th anniversary, they’ve gone and done just that. 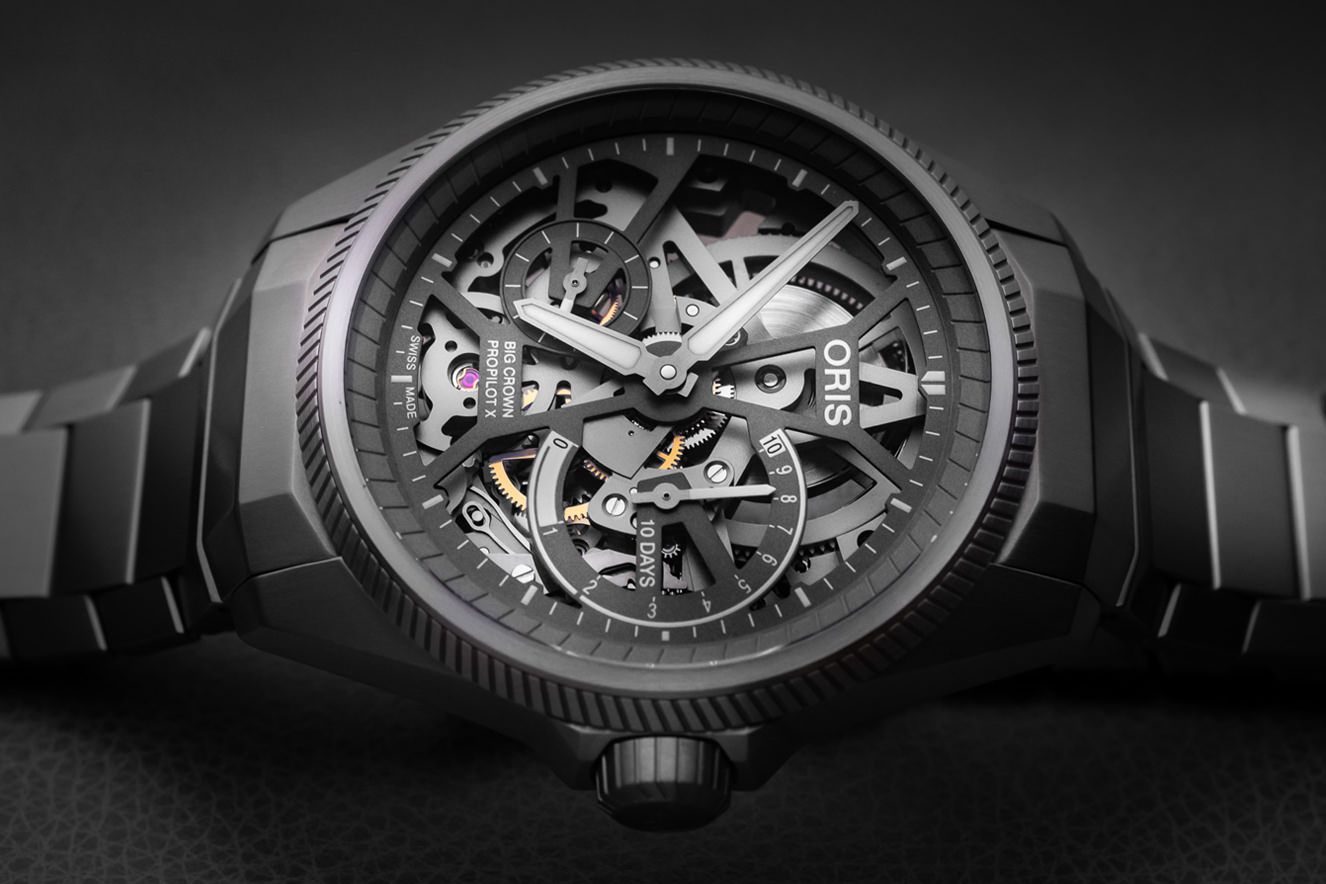 A Leaf Out Of The Past

Let’s start with the party piece of this watch, which is the calibre 115. The movement is in-house, but apart from powering the watch’s time-telling functions, it is also a part of a rich and illustrious story that goes back to the 1900s. Not many enthusiasts know this, but from the time Oris was founded till the brand resorted to using Sellita and ETA movements in 1981, it had already created over 200 in-house calibres. But then the quartz crisis hit, and it hit hard. The company, however, braved its way through the plummeting graphs of the Swiss watch market. In 2004, the independent company decided that it was high time to continue creating movements they could call their own. This ambitious project, in collaboration with the technical specialists at L’École Téchnique Le Locle, took 10 years to come to fruition, and finally, in 2014, at the brand’s 110th anniversary, they revealed the aptly named calibre 110. Since then, the brand has unveiled a new in-house calibre every year. 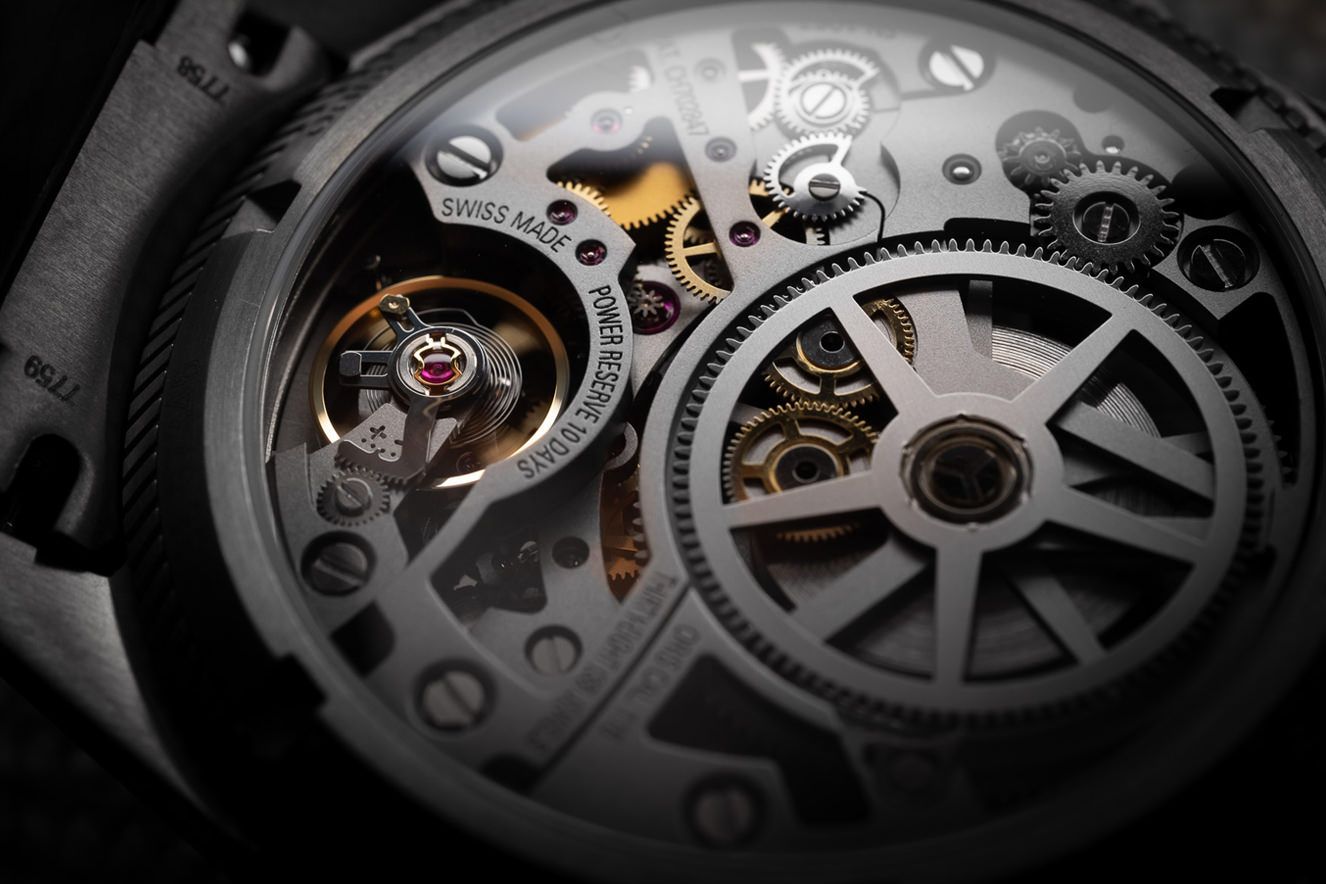 This year’s in-house calibre by Oris is special owing to the brand celebrating its 115th anniversary. It makes its debut in the brand new Big Crown ProPilot X Calibre 115. Improving on the calibre 110, as well as its successors, calibre 115 wasn’t a simple skeletonising job. Open-working its in-house movement took nearly two years of research and development. The result is quite spectacular, as it presents an amalgamation of an industrial DNA and a futuristic design philosophy. The 115, just like the 110, offers a truly impressive 10-day power reserve, thanks to a sizeable mainspring barrel, and a low frequency of 3Hz. This hand-wound movement also has a non-linear power-reserve indicator, which means the distance that the hand travels between the points in the reserve grows as the power declines.

The 44mm case is designed from the ground up and boasts a construction in grade-2 and grade-5 titanium. The galvanised body seamlessly wraps around this new movement, making the finished product fit like an (aviation) glove. The bezel is knurled and is clearly inspired by the blades of a modern jet engine, adding to its pilot watch credentials. 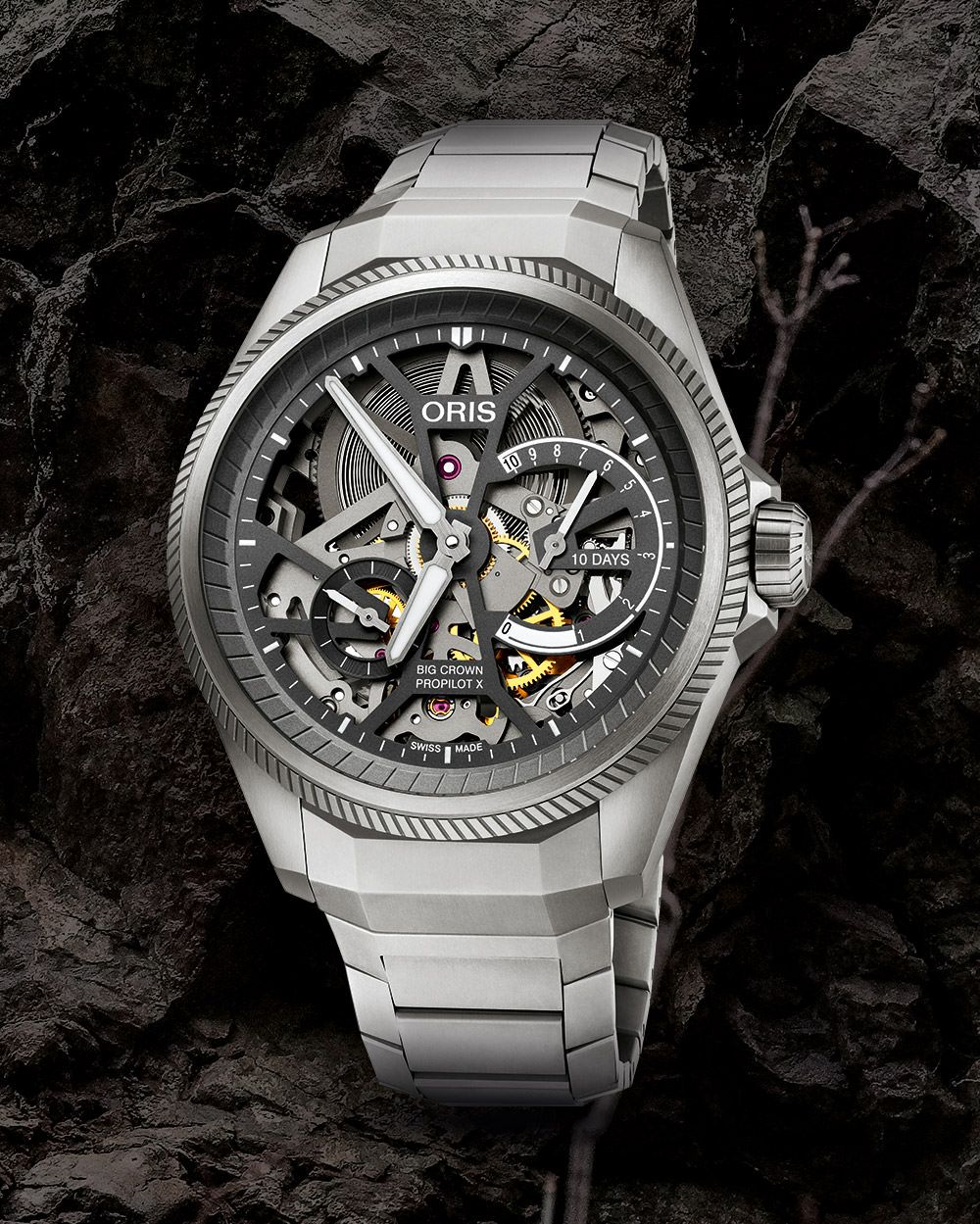 senior product design engineer for Oris, emphasises on maintaining a balance between the the formal language of the case and the movement. “How do you design a modern watch that is not a fashion watch? We wanted to create something contemporary that would retain its relevance as fashions change,” he expounds. The design team drew inspirations from the worlds of aviation and architecture for the aesthetics. “We gave this a strong architectural look.” Bühlmann explains, “The skeletonised barrel draws your eye first and then the bridges, and then you start seeing the detail in the wheels. The case is more like a stealth plane. There’s an exciting interplay between the movement and the static elements. “ 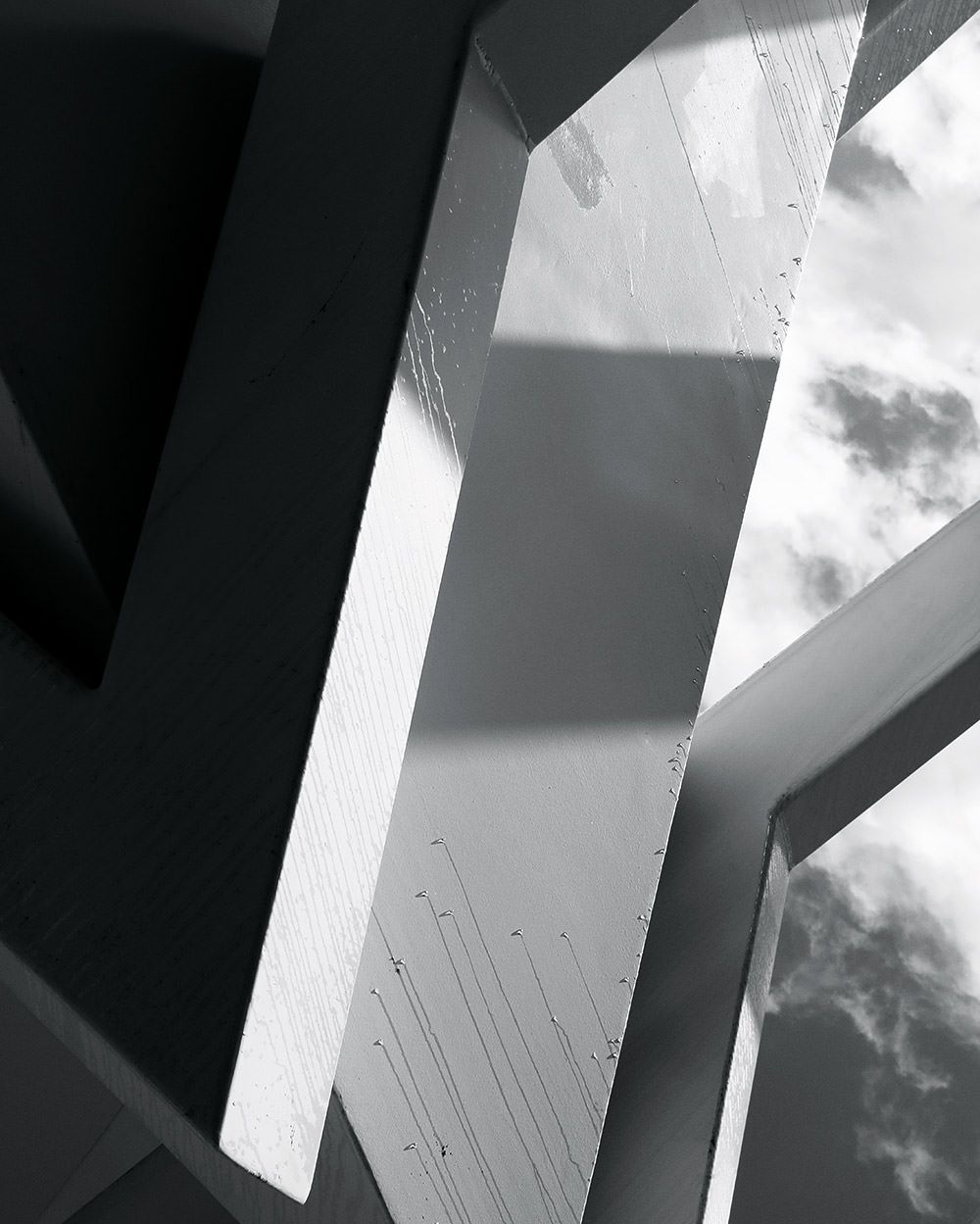 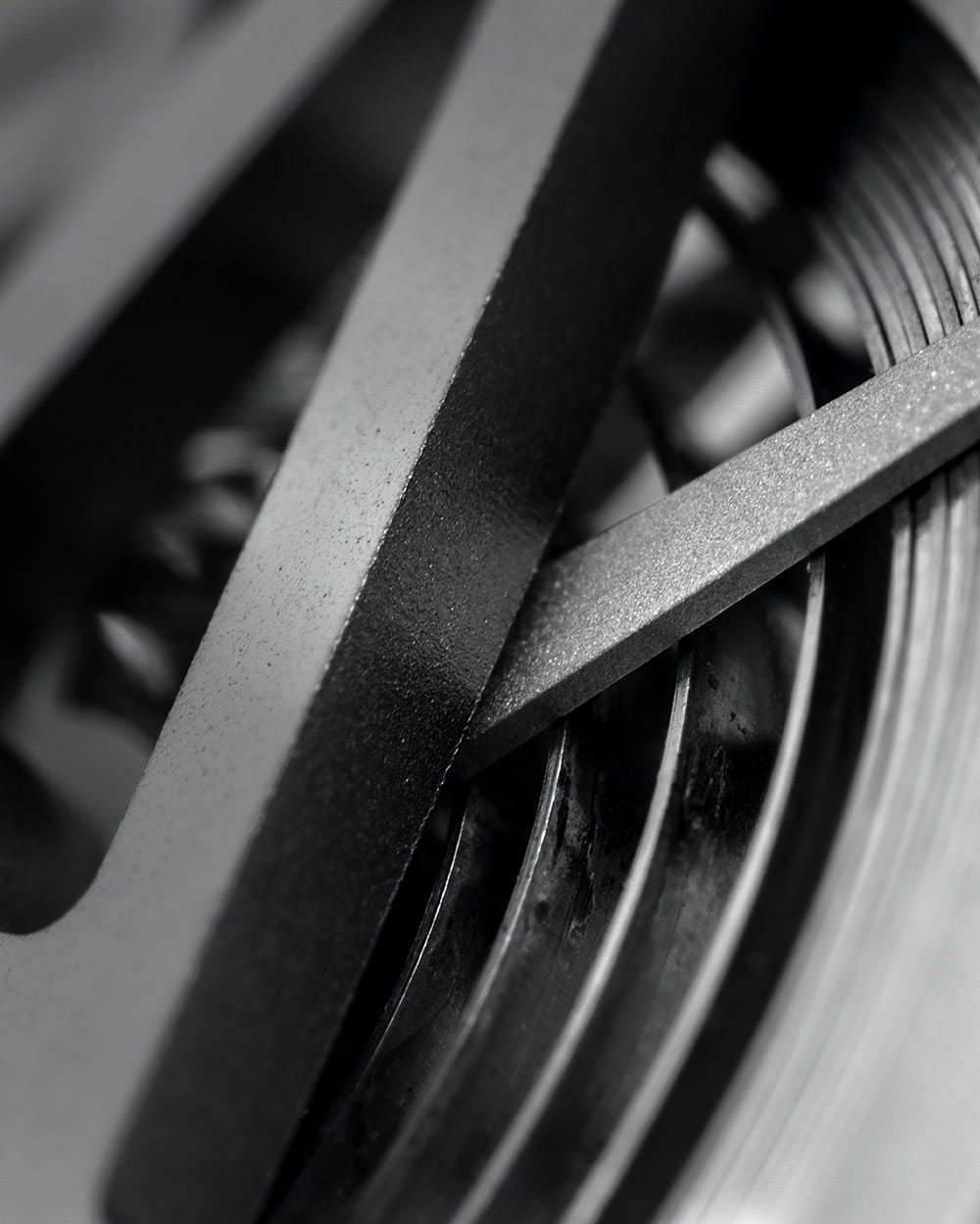 The titanium bracelet is unique to this watch, and is a piece of art on its own. The links connect seamlessly, and the unique, fighter jet-esque design of the folding clasp with ‘lift’ engraved on the top maintains the visual flow of the watch. 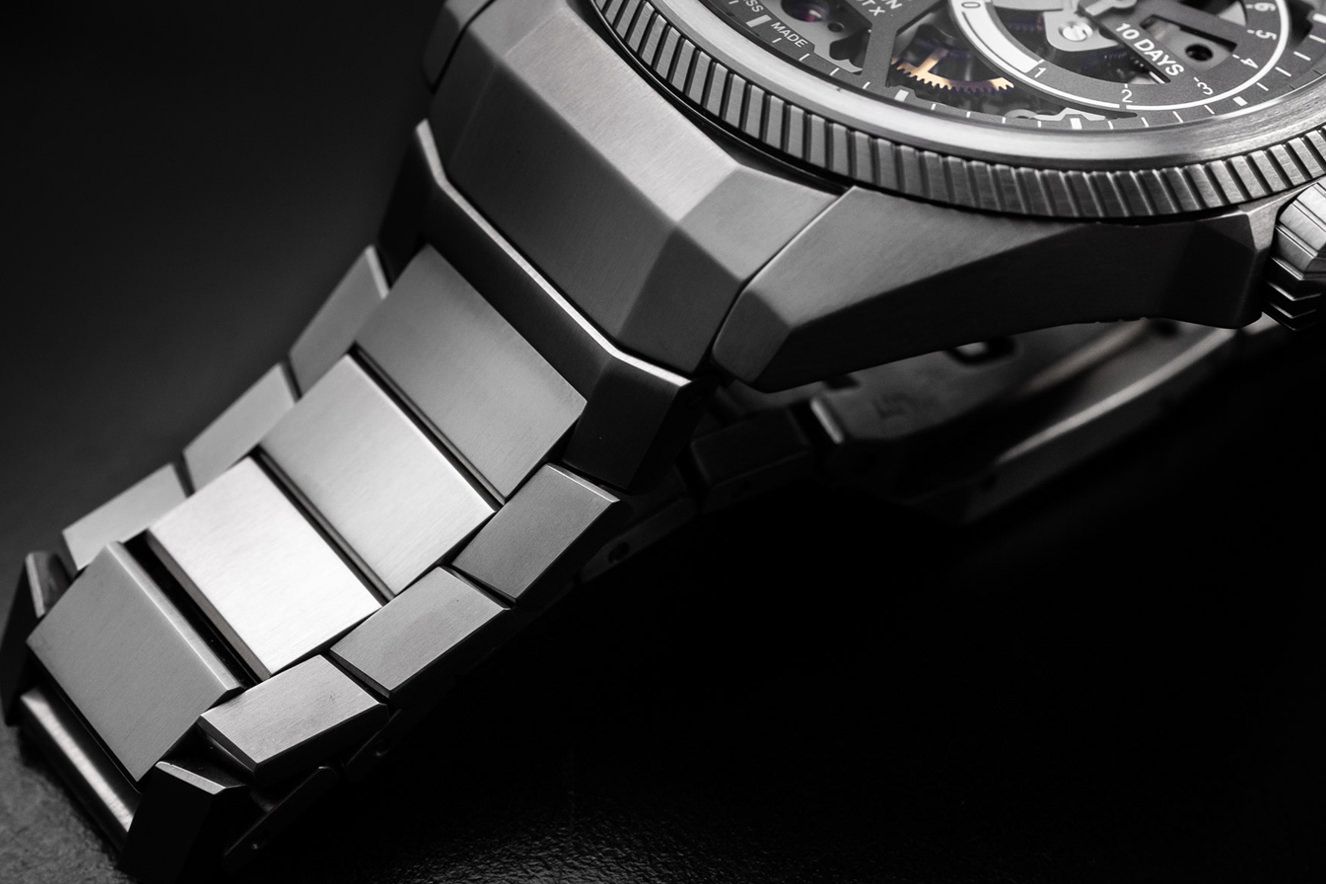 At a glance, the dial of the ProPilot X is reminiscent of modern day architecture. Visually, there is a lot going on. Skeleton watches are a tricky bunch. You have to walk a fine line of visual balance, or you either fall into a void of complete non-legibility or your timepiece ends up on the chintzy side. 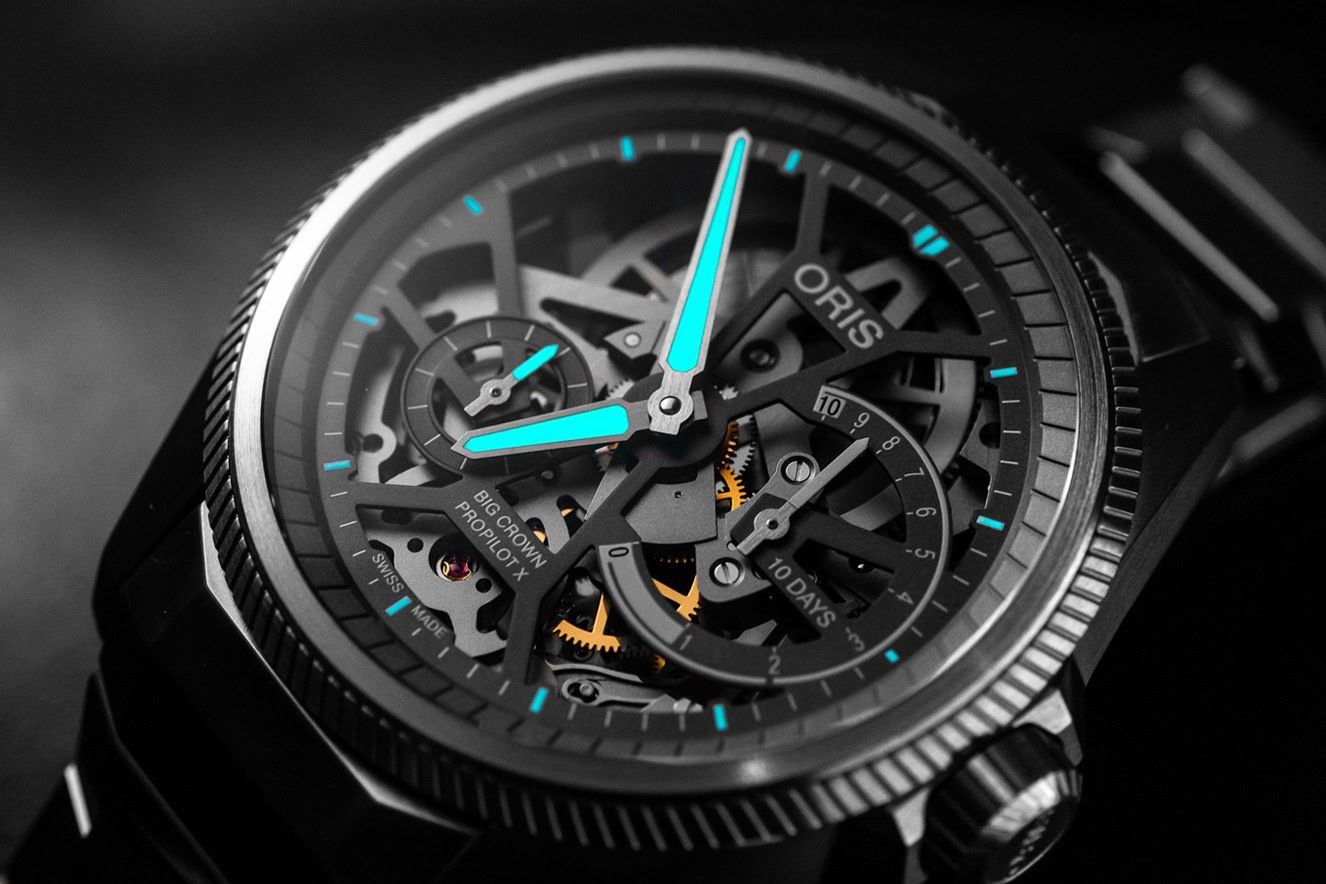 What Oris has done here, quite honestly, is astounding. Sticking to the industrial, yet modern DNA, the dial is perfectly legible, yet interestingly intricate. The hands, with a generous layer of luminous material, stands out brilliantly even against the hubbub it lays on top of, while the  small seconds and the 10-day power reserve indicator balance out the rest of it. This is a watch that is proud of the movement underneath and displays it in all its glory, without being pretentious. 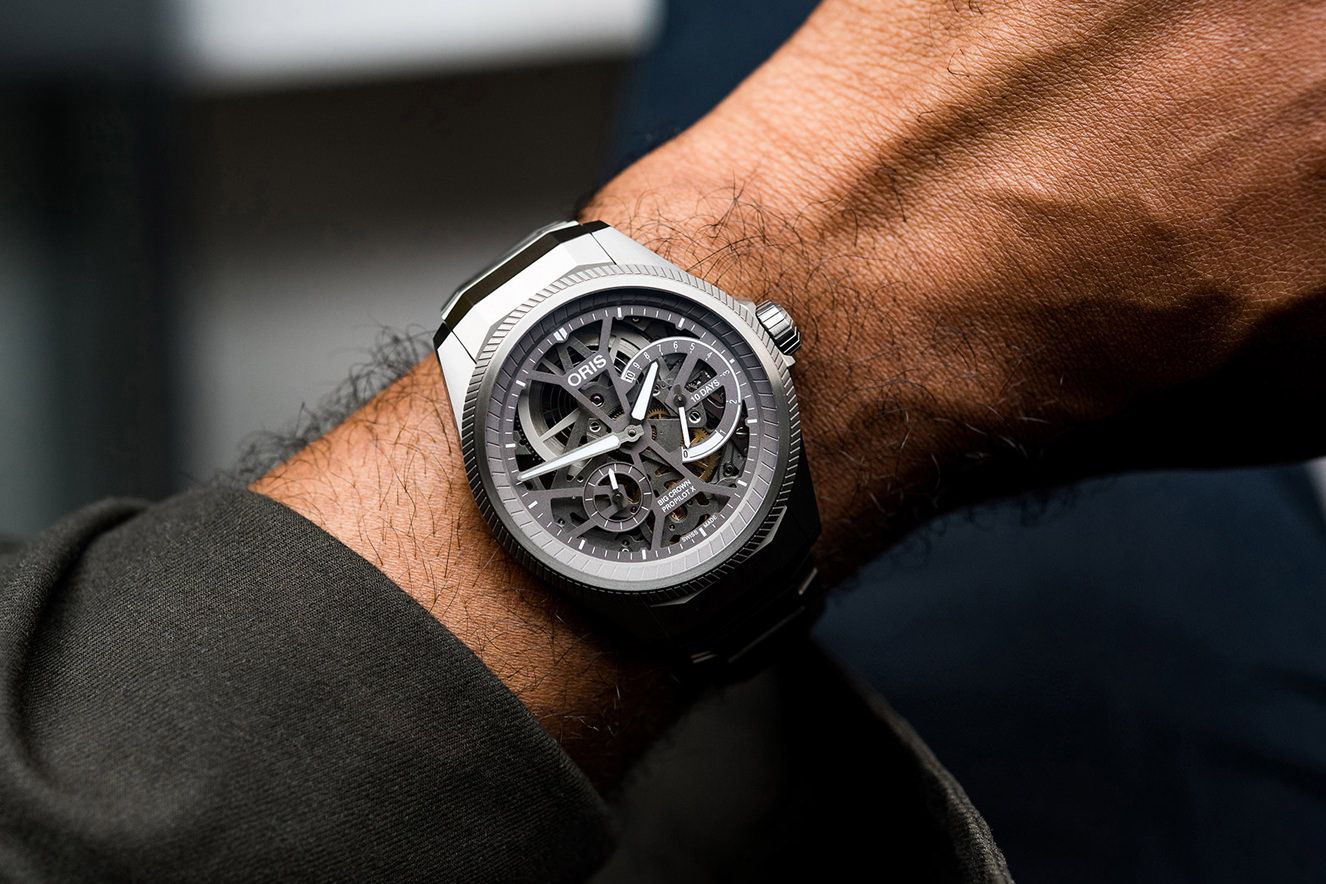 Oris has also come up with a great way to ensure that the customer can get up close and personal with the watch, using virtual reality (VR) technology. If the timepiece has piqued your interest, through the VR experience, you can virtually step inside the watch and experience the heartbeat of its movement as it surrounds you. Don the VR headset and get a virtual tour of this fantastic timepiece—inside and out. Once your journey is complete, Oris tells you to ‘Go your own way’, and that is exactly what this watch is about.


03The virtual reality experience is available in select Ethos boutiques, including the Oris brand boutique in Chennai, and in the multi-brand stores in  Mumbai, Pune, New Delhi, Kolkata, Hyderabad and Chandigarh

Catch a glimpse of the 360-degree experience here:

This is a first for Oris. The brand has rarely ventured into unknown territory, and creating something this avant-garde and wild marks the entry of Oris in a brand new world. The watch is completely unique, appeals to modern wrists, and—in true Oris tradition—doesn’t burn a hole in your pocket. This is most certainly the current apex of Oris’ skills and prowess as a watchmaker, and here at The Watch Guide, we absolutely love it.

people are currently looking at this product